« Back to Photographers Blog

This is an authentic antique cabinet photo of three unidentified graduates. These lady scholars are in fluffy white dresses with neck ribbons and high collars. The girl standing has a neck chain with a gold locket or brooch. The seated lady on the left has a double neck chain and the one on the right has a satin ribbon sash with fringe. All three have lily of the valley sprays and their diplomas. 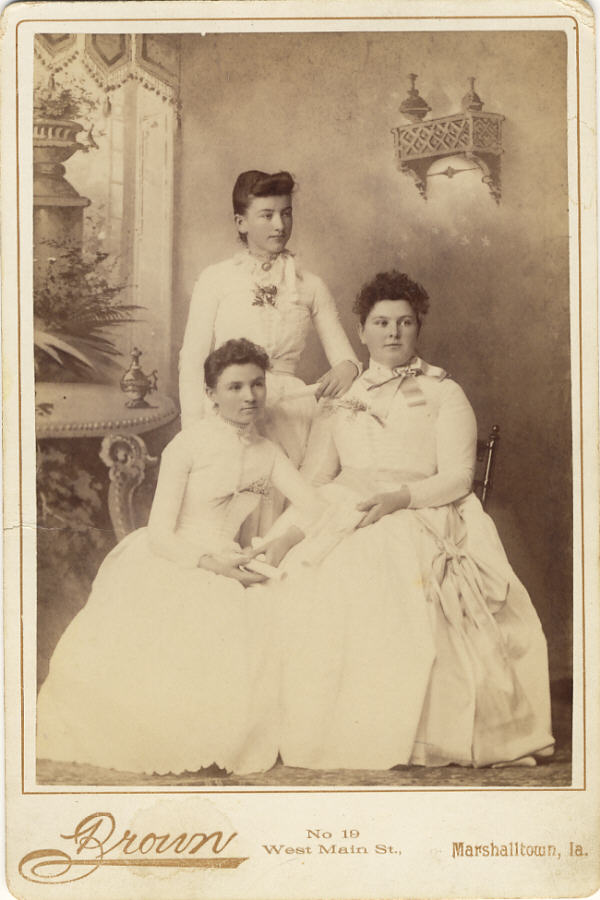 The image measures 3¾ inches by 5½ inches and is on a whitecard board mount with a gold pinstripe around the image and rounded corners and overall measures 4¼ inches by 6½ inches. The artists' mark is below the image in gold and the reverse is blank.

Using Federal and State Census Records and City Directories, it is possible to follow an early American photographer Theodore A. Brown from 1860 to 1920, and his son Lisle W. Brown, from birth in 1875 until the latter's death in Seattle, Washington in 1940.

On the 1900 Federal Census for Iowa, in Marshalltown, Marshall County, are two photographers named Brown. Living together at No. 19 West Main Street, the same address as on the one printed on the photo, are: Theodore A. Brown, photographer, born July 1851 in Illinois, and his son, Lisle W. Brown, photographer, born October 1875 in Illinois. Anna J. Brown who is listed with them is the second wife of Theodore A. Brown. Later in 1920, Anna J. Brown was working as a photographer with her husband. It is noted on the 1910 Federal Iowa Census that they married around 1900 and that it was Theodore A. Brown’s second marriage (and so she is not the mother of Lisle W. Brown.)

On the 1910 Federal Iowa Census Theodore A. Brown, Artistic Photographer, born about 1851 in Illinois, is in Marshalltown, Marshall Co., IA. He and Anna Brown are rooming with George C. Hixson on 12 South Fifth Avenue.

In 1920, Theodore A. Brown, photographer with a studio, was enumerated in Bellingham, Whatcom County, Washington. He and Anna J. Brown are living and working together as photographers at 609 16th.They owned the structure free and clear. [See last two paragraphs.]

Lisle W. Brown and wife Nona M. Brown are listed on the 1910 Federal Census for Wisconsin in Dane County, in Madison.Their address was 1017 W. Johnston St. and they apparently married about 1907. An infant daughter Eleanor was born in 1910 in Wisconsin. This census lists Lisle W.Brown's occupation as Photographer at the University. The 1911 Madison Wisconsin City Directory has the couple living in Madison and his occupation is University Photographer and again on the 1920 Federal Wisconsin Census, he is listed as Photographer U. of Wisconsin.

The 1860 Illinois Federal Census lists a Theodore Brown who washe son of John Brown, a farmer, who was born about 1815 in Denmark, and his wife Joanna Brown born about 1818 in Denmark.They were enumerated in Livingston County, Newtown Township; the Post Office was New Michigan. At that time, Theodore Brown was 10 years old, born Illinois, he is at school and he had a brother John Brown aged about 11 also born in Illinois.